These pictures were taken during our last trip. We came back from Sardinia two days ago.

Sardinia is a beautiful Italian island located in the Mediterranean; in fact it’s its second largest island.

It’s a land of beautiful beaches, rocky coasts, steep hills, sheep and nuraghi, which are round, chimney-resembling megalithic edifices of which purpose archeologists have no clear idea. Some suggest that their function was religious; some argue that it rather was military and others are convinced that they simply served as ordinary dwellings or rulers’ residences. Whatever they were for, back in the murky Bronze Age, archeologists claim that they are one of the most advanced structures of their time and they truly are impressive, especially when you stand inside, look up at the sky and feel so small. 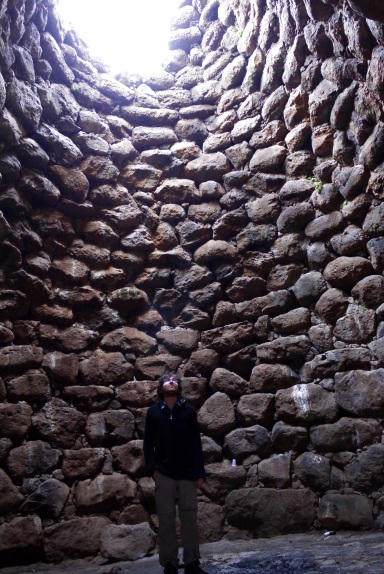 Sardinia is also an island dotted with thousands of little villages and small towns in which you can find very interesting murals and street art.

This picture was taken in San Sperate, a village located only 20km from Cagliari, which is full of interesting paintings and decorations. This is a scene from a local bar and I like this picture a lot as it’s rather hard to distinguish what is real and what is in the painting. Do you agree?