Albi is a small charming town located in the south of France, 85 km northeast of Toulouse. I had never heard of Albi before I lived in Toulouse doing my Erasmus in autumn 2008. It sounded then like a pleasant one-day trip which everyone was doing at the time, therefore fond of travelling as I was, I decided to visit it as well with my dear Estonian friend Kristiina.

We set off early in the morning, to be able to benefit from a whole day spent away from Toulouse. When we got there we couldn’t see much of it as the whole town was covered with the impenetrable density of the early morning mist. We strolled along the river trying to find our way, but all we could see was this grey delicate creeping veil of water droplets suspended in the air.

Only later, around midday when the mist finally subsided, did we realise that all this time we’d been walking around an enchanting and dreamlike tiny little place. All you’d expect from a south-of-France small town was just there: cobbled narrow streets, red brick medieval buildings with their red-tile roofs, soaring church-towers and an old bridge (Pont Vieux) built in the 11th century which at the time contributed to the development of the town and the emerging of new quarters and now is harmonically linking the two equally pretty parts of the town.

In the old town, which used to be the seat of the Archbishop of Albi and has been listed as a UNESCO World Heritage Site, you won’t miss the omnipresent Sainte-Cécile Cathedral. This masterpiece of the Southern Gothic style was built between the 13th and 15th centuries and it’s unique in its shape and interior decoration. 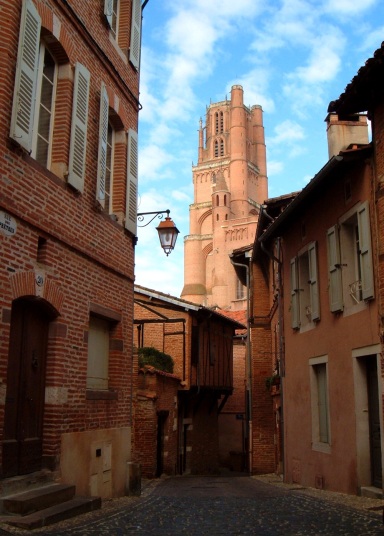 If you are an art buff, you should also visit the Toulouse-Lautrec Museum which is located in the Palais de la Berbie, formerly the bishops’ palace. If you don’t like art, go there for the building’s sake itself, it’s worth it!

Apart from the whole medieval touch to the town, you should know that in the 19th century Albi was a vibrant centre of the hat-making industry with nine factories running simultaneously. You can still see remnants of this golden era in the Albi mills, set along the river on the other side of the old bridge.

On the same side on the river, you will also find St. Madeleine Church, tucked between red-bricked houses and narrow alleyways. Not half as impressive as the cathedral, but seen from the river bank, it forms a very picturesque view.

I found it really interesting that so many traces of different epochs managed to survive centuries in such a well maintained condition.

I hadn’t expected much of Albi and I was very pleasantly surprised. It’s unimposing small-town atmosphere, its beautiful and well preserved medieval architecture left me enchanted and wishing to return.

This gallery was also published by tour-europe.net on 3rd June 2012.