The story of a jungle hike and our first lift

Posted on June 8, 2012 by Hitch-Hikers Handbook

When we reminisce about our first hitch-hiking adventures and the decision that lead to choosing this form of travelling over others, we always think of our stay on the Penang peninsula in Malaysia where we were inspired by great hitch-hiking stories told by our dear CS hosts Ang and Nara. After meeting them we decided to give it a go although this was not the first time we had ever hitch-hiked.

During the same trip in Southeast Asia, maybe a week before meeting our hitch-hiking gurus on Penang, we found ourselves in the Cameron Highlands, located in the central-western part of the country, 200km to the north of Kuala Lumpur. We wanted to stretch our legs a bit and we’d heard that this place would be ideal. The mountains, covered with a thick blanked of a tropical jungle and surrounded by numerous strawberry farms, stretch out over an area of more than 700 km2. They reach the height of 1829m and so do not require any advanced mountaineering abilities.

From Ipoh, where we’d had our first couchsurfing experience, we took a bus and travelled eastwards to Tanah Rata, one of the main villages in the Cameron Highlands. I seem to remember the bus ride to be quite scary, due to the fact that the driver, wanting to save petrol I’m guessing, decided not to use the engine whenever the bus was going downhill. And so we rolled up and down the steep and narrow road, which wound between some dramatic precipices on the way while we, clinging to our seats, prayed to get to our destination safe and sound.

The night had fallen in earnest when we arrived in Tanah Rata and after tough negotiations we managed to find a cheap guesthouse. 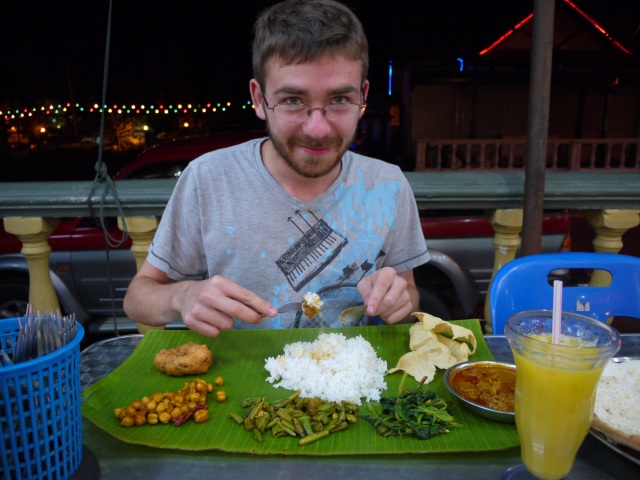 There was nothing to do in the town so we decided to set off for a hike first thing in the morning.  Various guesthouses offered hikes with local guides but everything we found seemed sickeningly touristy and revolved around visiting tea plantations, waterfalls or weird jungle plants. All we wanted was to tire ourselves a bit and trek some hills, and we’ve never been into organized tours and excursions either.

Therefore stupid as we probably were, we started considering going in the jungle on our own. We were lucky, though, as we met an American called Michael and a Frenchman called Stefan who were looking for more or less the same type of thing as we were. They had a map, so we decided to set off together and climb two mountains: Mount Jasar (1670m) and Mount Perdah (1551m).

We equipped ourselves with a 1,5l bottle of water each, rain jackets, hiking books and thick socks, as we’d heard that they’re the best prevention from leeches which lurk in the understory of the forest waiting for some white and juicy calves to suck on.

Setting off relatively early, and in good spirits, we hit the path.  We’d wanted to get tired and so we did, even quicker than we’d expect as the climb turned out to be quite steep and became increasingly more difficult.  The trek wasn’t marked in any way although it was quite obvious in which direction we should be going, as on both sides of this little path the wall of the forest was so dense that there was no way we could have forced our way through, even if we wanted to. At times it was like walking in a narrow corridor made of bush, humidity and flies, as sweating quite a lot, we attracted swarms of them. We managed to see some interesting lizards and other jungle inhabitants and by around midday or early afternoon we had reached a hilltop with a vast meadow where grass was so high that we couldn’t see the horizon.

We had our lunch lying in the grass and listening to jungle noises, and it was so peaceful that we nearly fell asleep on this sun-filled peak. But we couldn’t stay there forever so we forced ourselves to get going. But where do we go now? The path had led us all the way here and we hadn’t had any problems so far, but because of this high grass limiting our view, we simply didn’t know in which direction we should be heading. According to the map we were at a junction: left towards Mount Jasar and right towards Mount Perdah. We decided to split in order to find the path as soon as possible. I think it was Stefan who found some path and although it wasn’t what we wanted, we decided to take it anyway. To the best of our belief, we were going towards Mt Perdah, abandoning the idea of ever finding the other peak.

Here the jungle was even darker and thicker, and the climb even steeper. At times it was almost crawling on all fours, trying to cling onto roots and lianas in order to get higher or lower along the path. And the lianas were so strong that when we got bored of conventional climbing, we tried monkey-style hopping and swinging. It was a lot of fun!

In the end we never found the other peak but as the path started to incline downwards, we knew we would finally get somewhere and wouldn’t be stuck in this mountainous wildness. We got to a waterfall, which was a refreshing break and then downwards we continued through our leafy corridor. The jungle soon cleared out and we saw a hilly landscape dotted with huts and strawberry greenhouses. ‘We’re back in civilization!’ I thought, although I wasn’t entirely sure where this civilization was.

Helping ourselves to strawberries on the way, we got to the road which we recognised from our scary bus ride the day before. We were on the right road to Tanah Rata and even though we didn’t know how far along we were, we decided to start walking in the right direction. It was a single lane mountainous road and there were absolutely no cars passing by. We met a group of local kind who saluted us and accompanied us for a bit, but they disappeared after a while and we were on our own again. And then we saw a car going in the same direction as we were walking. As it was our only hope, we decided to flag it down. The car stopped, but it was a private car filled to the brim with fruit and other goods, so they couldn’t take the four of us on board. ‘Never mind, thanks for stopping!’. After another half an hour, we saw another car, a pick-up truck, which apart from some barrels at the back had enough room to take us. The driver was kind enough to stop and off we went towards our village. 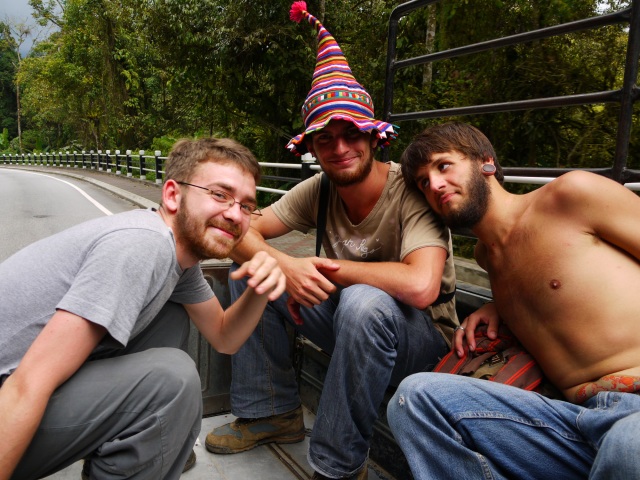 That day we weren’t planning to hitch-hike and the very idea of hitch-hiking as our main way of travelling hadn’t even been conceived yet. We had never considered it before and we’ve always “blamed” Ang (who we met a week later) for instilling this idea in us with his amazing stories from the 60’s. And even though we weren’t planning to hitch-hike in Cameron Highlands, it seemed then like the natural thing to do and we felt comfortable with it. It was a pleasant experience and it makes me think that it might have been one of the reasons why we’d been so open to the idea of hitch-hiking presented by Ang a week later.  Whatever the true reason was, it didn’t take us a long time to figure out that this is exactly the way we wanted to travel.

This story was also published by I Love Malaysia on 11th June 2012.