Posted on August 24, 2012 by Hitch-Hikers Handbook

León, home to over 300,000 people, is the capital and largest city of the León province. Founded as a Roman military encampment, the city has been occupied for over two thousand years and is one of the jewels of Castilla, mixing a heady blend of romanesque architecture, medieval streets and a large, student driven, café culture.

We arrived in León after being driven by a very kind man who helped us after we had been waiting for two torturous hours at a motorway turnoff two hours away from León. After approaching the old town from the river we were greeted by Plaza de San Marcelo which contained the tourist information office. The square was surrounded by the neo-gothic Casa de Botines, designed by Antonio Gaudí and the sumptuous Palacio de los Guzmanes, a renaissance building which houses the Provincial government of León. Calle Ancha, the old town’s principal street, shot off the square, dissecting the old town on its way towards the cathedral.

León, a UNESCO listed city, is a popular stop on the Camino de Santiago and is especially famed for its Easter processions which attract tourists from far and wide. The city was one of the most important in medieval Spain and hosted the first Parliament in European history in 1188. The decline of León during the early middle ages, after the union of León with the Castillian crown, was arrested in the 19th century, when León became an important communications hub for the transportation of coal.

The walk up calle Ancha, with its shops and cafés is pleasant enough, but the cathedral at the end of the road takes the breath away. León Cathedral is a masterpiece of the gothic style and took over three centuries to complete. The cathedral is a playground of light and its stain glass windows are among the most impressive in the world, pouring colour around the vast space. The price of admission (€5) also includes an informative and interesting audio guide, helping the untrained eye to unlock the secrets of this wonderful place.

A short stroll down calle de Mariano Domingo Berrueta, past Barrio Húmedo, the district that contains a multitude of bars and restaurants which come alive during the night, leads you to Plaza Mayor, a beautiful square that when illuminated is truly stunning.

Within the old town, the Romanesque Basilica of San Isidoro is also well worth the visit. Containing the bodies of 11 kings of the ancient kingdom of León, it was constructed by some of the most skilled sculptors, stonemasons and artists of the day. 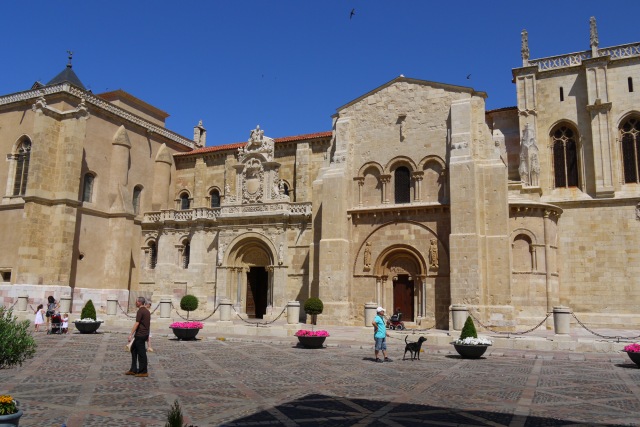 One of the best things about León is the food. Here, in contrast to the rest of Spain, tapas is always served with a drink at no extra cost and it is common practise to jump from bar to bar, eating the equivalent of a full size dinner. Specialities include morcilla (a type of black pudding made from pig’s blood and onion), and an array of fish and meat treats to fill up on. Delicious!

León airport is situated 6km outside the city and does offer some international flights (to Paris) but mostly services the domestic market.

There are two train stations in León one on the RENFE line and the other FEVE.

The nearest motorway is the A-6 which runs from Galicia in the north-west to Madrid. There are national roads that also connect León to the rest of Spain – the N-630 (north) N-601 (south-east).

Hitching out of León is not easy, walking from the centre to a good spot from which to hitchhike took us about an hour. We managed to snag a ride on the N-630 heading south. After several rides we were finally able to get on the A-66 to Benavente and from there the A-6 to Madrid.

To get to the N-630 you need to cross the river, preferable on Av. De Fernández Ladreda, the more southern bridge. After passing the football stadium and walking over the fly over, turn left onto Av. de los Antibioticos, which is the N-630. Then walk, and walk, and walk until you are free of the city and you can start to hitch.

Our accommodation tip for León is a real gem. Overlooking Plaza Mayor, Pensión Puerta Sol is difficult to find but once tracked down you will be glad you have. The address is Calle Puerta Sol Número 1, Piso 2º Tel: 987211966, a street that runs behind Plaza Mayor, and you must check the buzzers very carefully to find the right one. Double rooms cost €28 and single rooms €20 but for the price you have a stunning view over the square with a private balconies on which to relax. More information can be found at www.pensionpuertasol.com