One last bus to the crowds of Dubrovnik, Croatia

Posted on August 25, 2013 by Hitch-Hikers Handbook

After our previous failed attempts at hitchhiking in Bosnia we took what we hoped would be the last bus of our trip from Mostar to Dubrovnik in Croatia. On the bus I was engaged in conversation by a very nice, if slightly arrogant, Bosnian who spoke English better than I did and who had worked as a translator in the Hague and a British expat living in Australia who seemed to take a perverse joy from his job as a customers officer when removing people from his adopted homeland. I didn’t even bother pointing out the contradiction of being an immigrant who kicks out immigrants. After a few sweaty hours sitting on a bus at the border, we arrived at our destination. 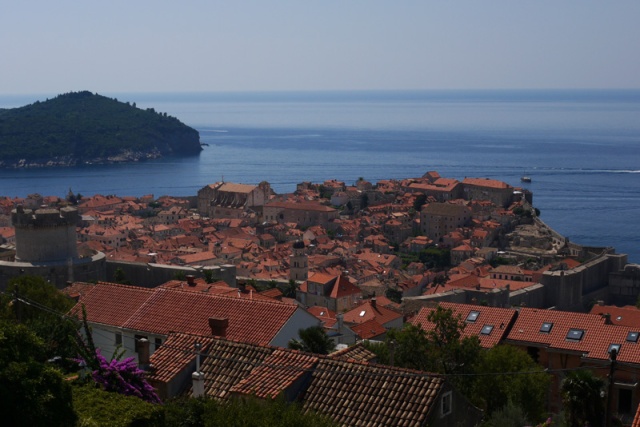 Finding a place to sleep was a bit of a struggle as the man who offered the cheapest accommodation was, to put it bluntly, an arse. I can never understand why people who want your money are rude to you. Perhaps it is the cynicism that comes with doing the same thing everyday but I was always under the impression that if you want something from somebody its best to be polite. Still, we stayed at his place so he got what he wanted, but honestly!

Nicknamed the Pearl of the Adriatic, Dubrovnik is a UNESCO World Heritage Site and one the most impressive examples in the world of a walled medieval city. Formerly it was the capital of the Republic of Ragusa, a maritime trading power which reached its zenith in 15th & 16th centuries and has been inhabited since the 7th century.

Impressive features include the 2 km of defense ramparts that surround the old town as well as an array of churches and historical important buildings built in the Renaissance style.

It is stunning but it is also one of the most popular tourist destinations in the area, so if you don’t like crowds it’s perhaps best to stay away. Prices are eye-watering at times and the tourists that visit are the type that carry Gucci bags and dress to impress. In short, it’s chic. The city is also currently being used to film the wildly popular HBO series A Game of Thrones.

2 Responses to One last bus to the crowds of Dubrovnik, Croatia