Our first experience of hitch-hiking in Albania, camping wild and getting lost in the forest

Posted on September 9, 2013 by Hitch-Hikers Handbook

The capital of Albania, Tirana, proved to be an interesting city but after a while we got quite bored of it and longed for some nature again. We’d heard many good things about pristine Albanian beaches, therefore we decided that the coast would be our next stop. Since nobody in Tirana gave us a good recommendation for a wild beach, we opened Google maps (how did people even travel before, nobody knows…) and found a place that looked perfect: near the road, near the forest, near a village. Score! We’d done that 3 years ago in Greece and the place we’d chosen served us well, so we trusted our intuition and decided to go near Spille. 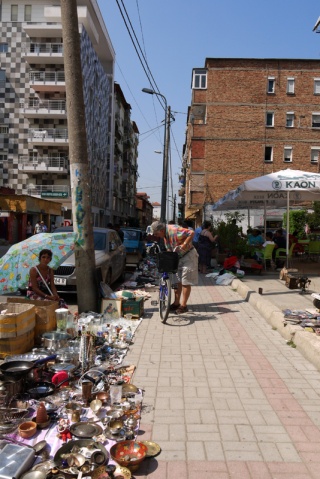 We entered Albania in a comfortable Polish lorry, driven by a lovely guy who took good care of us and drove us from the Macedonian border directly to the outskirts of Tirana, so until we were leaving the capital, we didn’t have a clue what hitch-hiking in Albania would be really like. We’d heard very different opinions, not only expressed by drivers in neighbouring countries telling us that Albania is very dangerous and we might be robbed or even killed, but also reading comments on the Internet written by people who said that free hitch-hiking in Albania doesn’t really exist and you’d either have to pay in lek or in sex. The reality, as it very often happens with hitch-hiking, proved to be completely different from the negative opinions you hear or read. Put simply, people love scaremongering!

The first person who stopped, in all fairness, asked for money and when we said no, he asked for sex, but that was the only similar situation during the whole of our stay in the country and we are very happy it didn’t put us off.

The next driver was a very nice old man who spoke some words of English and German and explained he was a salesman for a German company and his son studied at Cambridge. He drove us out of Tirana and left us in a good spot past Durrës. From there we got an easy lift with two young guys who spoke some Italian and drove us to the turning to Spille. Perfect, we thought, one more lift and we are there!

Since Spille is a small place, there wasn’t much traffic going there either, so we put our hopes into every car that drove past. We didn’t wait long until a black 4×4 pulled over and the driver asked us in Italian where we were going.

– Dove vai?
– Spille.
– Cinque euro. – said the driver without even thinking about it.
– Non abbiamo denaro. (We don’t have money) – I replied with an apologetic tone in my imperfect Italian.
– Ok, entrare! – He was just a chancer, money or not, they were going there anyway, so why the hell not.

The door opened and we saw the whole family inside! We put our rucksacks in the boot and started thinking how we’re all going to fit but the space soon was generated and all five of us squeezed on the back seat. Then off we went on the dirt road heading for Spille. Our conversation with the driver let us forgot about the inconveniences of the journey and before we even noticed, we were at the cross roads: right to the village, straight to the beach.

– Dove vuoi andare? (Where do you want to go?)
– A la playa – said I in Spanish, but he understood and soon we were on the beach.
And when I say ‘on the beach’, I literally mean ON the beach, as he decided to park his 4×4 directly on the sand. We took our bags, waved goodbye and went to look for a good place to camp.

We didn’t even have to walk 20 m to reach the forest, but I was quite apprehensive of pitching our tent right next to the beach, so we walked deeper into the woods. We knew we might have problems finding the spot later on, so we left some markers and went for a swim.

The sea was warm and the beach was great. Although it wasn’t completely deserted, it was nice to be far away from tourist resorts and hotels. When we got hungry, we went to a nearby restaurant hut and ordered the best deal ever: pasta with fancy seafood goodness + beer which cost us 5 Euros each!

We spent the rest of the evening chilling on the beach, drinking beer, having a smoke, looking at the stars and observing Albanian kids start a small campfire nearby. When everything was dark and quiet, and there was nothing else but the stars, the moon, the waves gently beating the sand and us, we decided to face it and try to find the tent. 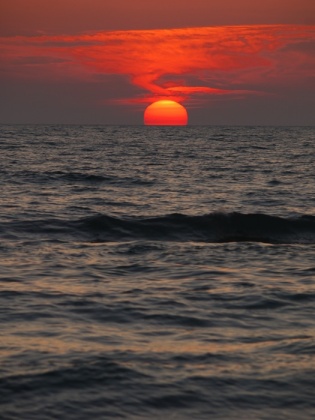 We got to the verge of the forest without any problems but after we crossed the first line of trees we realised that we couldn’t even make out where the path was, let alone find our small green tent. We started walking slowly, with our arms erect, trying to grope what was in front. We got to the first clearing and miraculously managed to find our marker which suggested that from then on we had to go straight. But where the hell is straight? If everything around you is darkness, terms like left, right and straight seem irrelevant. But we had to walk somewhere, so slowly we proceeded ahead.

Ouch! Thorns! – screamed I and instantaneously knew this wasn’t the right ‘straight’.

When it was bright, the path looked harmless and childishly easy. We hadn’t even noticed there were thorntrees around but for some reason when you can’t see, all the thorns, holes and trees of this planet decide to stand in your way. We had a small light but all it enabled us to see were huge bushes and high grass right where we thought the path should be. When you walk in a dark forest, everything looks big and scary; all the shadows seem to follow you and all the faintest sounds are amplified to the maximum in your head. It’s like being a child again.

We walked left and right, and straight again. Then back to the markers and onward again, looking for the elusive ‘straight’ a million times. After what seemed like ages, we though we must have checked all the possibilities and the panic started. Of course, nothing serious would have happened, but the fact that you have a comfortable tent, a sleeping mat, a sleeping bag, water and food, somewhere probably within your reach but you are walking in circles unable to find it, was very frustrating and the perspective of spending a night on a cold beach, surrounded by bugs (no, I will never get used to them!), with nothing to drink, seemed a terrible turn of events. At some point we weren’t even sure where the sea was any more and we though we might not even be able to go back to the beach and would be doomed to sleep among the thorns.

It sounds like madness but we decided to split. Jon went on with the light and I stayed right next to the markers, desperately holding onto this one thing we did know: that at some point in the past we’d been in that place and the tent was not far from it. To make sure he doesn’t lose the trace of me, we started shouting to each other; in a situation like this you have to use all your senses.

I saw him far away in the dark, holding our little light, groping and scrabbling among the bushes, swearing and swaying as he had no idea where he was. Suddenly, I saw a reflection of something and with my voice directed Jon to head in the right place. We were saved! The tent was there, just where we left it, probably not even 25 metres from where I was standing!

Note to self: screw forests, next time we will sleep right on the beach!

7 Responses to Our first experience of hitch-hiking in Albania, camping wild and getting lost in the forest