Posted on November 8, 2013 by Hitch-Hikers Handbook

Casco Viejo, or old town, sits on the east side of the city, to the east of the Ría de Bilbao (also known as the Río Nervión), which makes a sort of upturned “U” as it runs through the city. The Casco Viejo contains the Cathedral and siete calles (the original seven streets of Bilbao), and has the highest concentration of bars and accommodation options. Across the river from the Casco Viejo are the neighbourhoods of Abando to the north (home of the majority of museums), Indautxu further south (where the night-life is after 2 a.m.), Basurtu to the southwest (location of the bus terminal), and Deusto west, across the river.

Information: Designed by Canadian-American architect Frank Gehry, the Guggenheim Bilbao is a mass of twisted titanium and is one of the most celebrated buildings of the 20th century. It resembles a space age boat covered in glittering metal squares which evoke images of the scales of a fish whilst the huge skylights are made to look like fins. Whilst inside the collection is not the most impressive, there are regular temporary exhibitions frequently comprising some of the very best masterpieces from other Guggenheim branches.

Information: Founded from a merger of two galleries in the early 20th century. The museum’s collection covers from the 12th century to the present day and contains an extraordinary variety of art works. In total there are over six thousand pieces including paintings, sculptures, drawings, engravings and objects from the decorative arts.

Information: Established in 1921 with a brief to focus upon the roots, archaeology, ethnography and history of Euskadi, the Basque homeland. The museum is not the best organised but might have interest for those wishing to learn more about Basque culture.

Information: Originally built in the Neo-baroque style in 1890 by architect Joaquín Rucoba on the sight of several previous theatres. The current incarnation of the Arriaga Theatre is its 2nd, after severe flooding that destroyed Rucoba’s work in 1983. Today the theatre is owned by the local municipality and is still a working space.

Information: The building, originally a wine cellar, was renovated by French designer Philippe Starck in collaboration with Thibaut Mathieu  in the modernist style. Today, the building is a “Culture and Leisure Centre” and consists of an auditorium, a cinema multiplex, a library, a fitness centre, showrooms, shops, and a restaurant. What makes this building great is the creative design including 43 pillars and a swimming pool with a glass floor.

Information: Housed in the former Euskalduna shipyard, next to the current Euskalduna Performing Arts Centre, the La Ría Maritime Museum is set across 27,000 m2 and is a must for all boat lovers, I guess.

What is it? Seven streets, and many alleyways, forming the medieval neighbourhood of Bilbao
Where is it? Located along the eastern bank of the River Nervión, south west of Parque de Etxebarría

Information: Designed by architects Federico Soriano and Dolores Palacios as part of the redevelopment of the Euskalduna shipyards. It was created to look like a vessel permanently under construction standing in the former docks. It is an interesting building and in 2003 it was declared by the International Congress Palace Association as the world’s best congress centre.

What is it? Neo-classical public square enclosed by arcade buildings
Where is it? In north Casco Viejo

Information: Home of the Euskaltzaindia, the Basque Language Royal Academy. This wonderful square was built in 1821 as the main site of the Biscay Government. The square itself is accessed under arches known as cuevas (caves). Every Sunday there is a flea market to be enjoyed on the square.

Information: St. James’ Cathedral or Donejakue Katedrala, to give it its Basque name, dates back to 1300 when Bilbao was still just a fishermen’s enclave. Architecturally, the present building is a blend of styles: from the 15th century Gothic of the cloister and the main vault, to the overly lavish Gothic Revival façade and spire. Special interest within the Cathedral are the cloister, the beautiful Puerta del Angel, the portal that gives access to C./Correo and the stone carvings of local merchants running along the buttresses of the main vault.

Information: Originally built on the foundations of the city’s original Alcázar (Fortress) in the Gothic style, the Church of San Antón has three chapels: Chapel of Provost, Chapel of Piety and the Chapel of San Roque. A notable feature of the church is the Renaissance façade testament to the amount of work that has been done on the church over the passage of time. The Belfry, built in the Baroque Dieciochesco style one of the best examples of its kind in the whole Basque Country.

Information: One of the most striking examples of Baroque architecture in the Basque Country, the Church of St. Nicolas opposite the Arriaga Theatre and is a stunning building. In the interior the Church is designed in a octagonal shape with notable features inside the church being the Altarpiece and statue of Juan de Mena.

What is it? An arched bridge that is one of the emblems of the city
Where is it? Spans the Estuary of Bilbao and links the neighbourhoods of Bilbao La Vieja and Casco Viejo, next to the Church of San Antón.

Information: Constructed originally in 1381 it is the oldest bridge in the city and appears on the city’s crest of arms. It has been reconstructed many times with the most recent destruction befalling it during the Spanish Civil War. 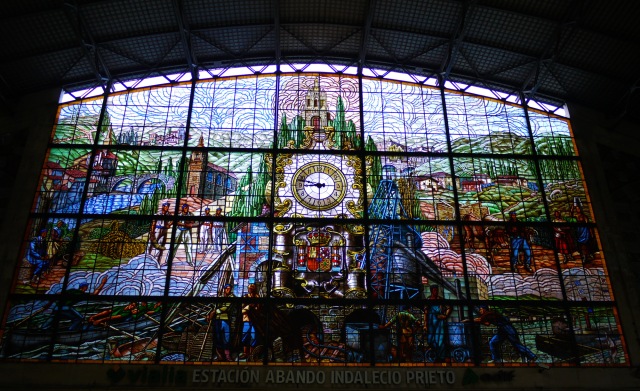 Information: OK, it is a train station but it does have one feature that is worth checking out. The impressive stained glass atrium is a real sight and depicts typical Basque jobs and workers in action.

Information: Established in 1961, the museum is housed in Encarnación Church, an old Dominican convent, and contains over 2000 pieces with 500 on display at any one time. It is divided into three sections: escultura-pintura (sculpture & painting) orfebrería (jewellery) & ornamentos (ornaments) spanning from the 12th century to the modern age.

Information: Constructed in the 16th & 17th centuries in the Gothic style, the Church of St. Vicente Matir is a three nave church and the final resting place of the poet Antonio de Trueba. Notable features include the Renaissance façade with Triumphal Arch and a spectacular altarpiece.

Information: Specialising in fish & seafood, the Riverbank Market was built in 1921 and is the largest indoor market in the world. The building itself is a columnless open space which has a unique, translucent material floor that enables natural light throughout the buildings. Outside, the Market is adorned with some interesting art-deco pieces including windows, lattice windows, floral decorations and other decorative elements.

Information: Today the seat of the executive branch of the Government of Biscay, the palace was built between 1890 and 1900 by architect Luis Aladren. It is probably the best example of eclecticism in the whole of the Basque Country. The interior of the palace is noted for its grand staircase and decoration, with lavish use of marble, wood, stucco, mirrors, plaster, vases, ceramics, stained glass and paintings by important artists of the late nineteenth century.

What is it? A public park with lovely views over the city
Where is it? In the district of Begoña, north of Casco Viejo 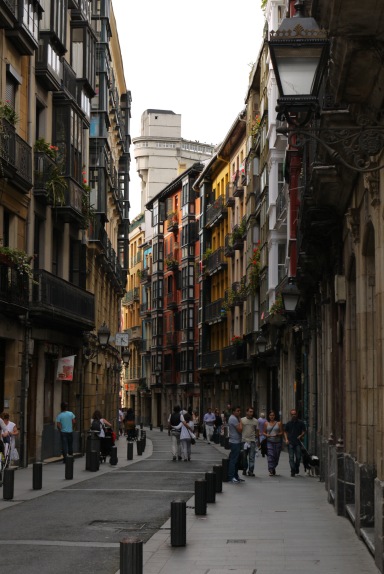 Information: Etxebarria Park is a municipal park constructed on the site of a former steel foundry in the 1980s. Due to its position on the side of a hill the park has great views over the Abando and Casco Viejo districts. To reach the park from the Old Town, one can either climb the stairs on Plaza Unamuno or pay 0.40 € to use the Begoña lift (in the picture) from next to the entrance of Metro Casco Viejo.

Information: Built in 1892 on the site of the former Convent of St. Agustín by the architect Joaquín Rucoba, the Town Hall contains an elegant spire and façade punctured by balconies and colonnades. Inside the impressive Salón Árabe (Arabic Hall) designed by Jose del Solar is perhaps the highlight.

What is it? A funicular railway that goes to the summit of the nearby Artxanda Mountain
Where is it? Plaza del Funicular, s/n 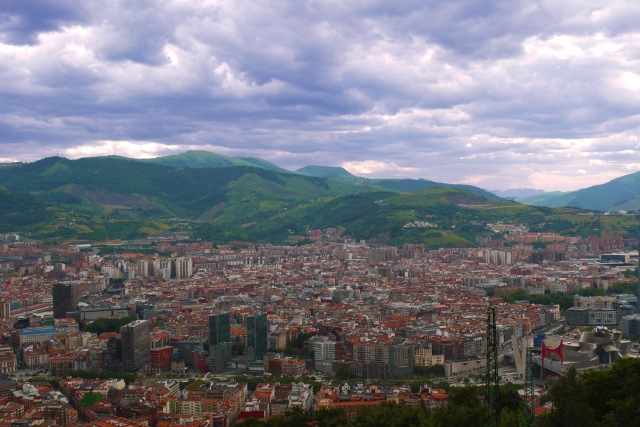 Information: For unmissable views over Bilbao take the funicular railway for 0,92 € up Artxanda Mountain. Constructed in 1915, the railway links Bilbao centre with the recreational area at the summit of the nearby mountain, which contains a park, several restaurants, a hotel, and even a sports complex. To catch it, the station of the funicular is just north of Zubizuri bridge, within walking distance of the Guggenheim Museum and runs from 7.15 a.m. – 10 p.m.

What is it? Suspension bridge providing access to the north of the city
Where is it? Right next to the Guggenheim Museum Bilbao

Information: Built in the 1970’s under the guidance of engineer Juan Batanero to solve the traffic problems in the north of the city the quirky bridge was given a new lease of life when the Guggenheim Museum Bilbao was built underneath it, literally merging its structure into the museum’s.