Many are drawn to Málaga for the weather, the beaches and of course to visit the birthplace of Pablo Picasso but it is so much more than an oasis of calm in the storm of the Costa del Sol. What this charming city lacks in monuments it more than makes up for it in atmosphere and vibrancy. The city has a nice mix of things to do and see as well as streets that are packed with life around the clock. The well connected local transport system also makes moving around the city, and to its edges for hitchhiking, relatively simple.

Málaga is the second largest city in Andalusia, the sixth in Spain and is home to around 500,000 people. It lies on the much famed Costa del Sol, a beacon for tourists in search of sea, sun, sand and good times.

The history of Málaga is one of Europe’s longest, the area having been inhabited for nearly 3000 years, and was once part of the Carthaginian and Roman empires, before falling into Muslim hands in the 8th century. As part of the Emirate of Granada, Málaga was one of the last cities to fall to the Christian monarchs during the Reconquista (reconquest) providing an insurmountable object until, finally, in 1487, it was incorporated into Christian Spain.

During the 19th century the city underwent a period of rapid industrialisation, until the money was frittered away and the manufacturing moved elsewhere. In the Spanish Civil War, the city originally remained in Republican hands, but by 1937, after sustaining heavy bombardment from the sea, it was firmly in the Francoist camp.

Today, in the “Capital of the Costa del Sol”, tourism plays an important role in the local economy. Additionally construction and technology services are vital to local employment, with a steady increase in such fields as transportation and logistics. The weather is also Málaga’s friend as it enjoys very mild winters (7°C – 16°C) and warm to hot summers (27°C -35 °C), it hardly ever rains and is incredibly sunny all the time. Reader Mike, also points out the suffocating humidity once the temperatures rise over 30°C. 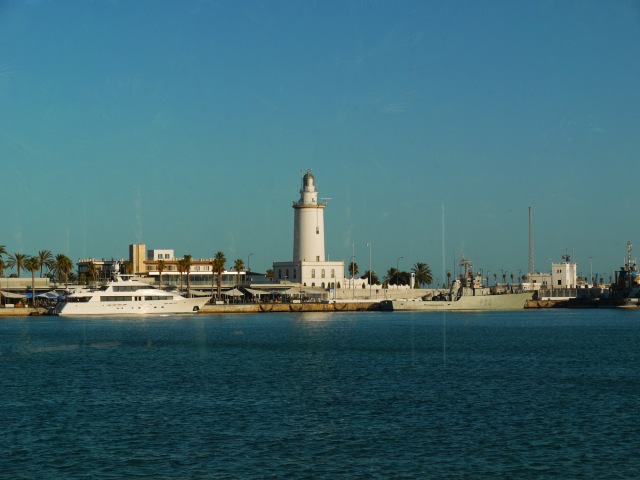 The two biggest festivals in Málaga are Semana Santa (Holy Week) which takes place in the seven days leading up to Easter and the Feria de Málaga held during the second week of August and lasting ten days. Semana Santa in Málaga is a noisy affair. With candle-lit streets playing host to unconstrained revelry, flamenco and cheer. The Feria de Málaga is another of those peculiarly Spanish kinds of festivals, full of recklessness, piety, alcohol soaked streets and bullfighting.

Despite not being seen as one of southern Spain’s cultural heavyweights, Málaga’s success at remaining largely unnoticed by the beach loving hordes, has allowed space for the city to breath. A new metro system is under construction and the city is currently on the short-list for the 2016 European Capital of Culture.

Málaga is not exactly stuffed with tourist attractions. The smallish city centre is surrounded by, to the north, Plaza de la Merced, the principal square of the city. To the east sitting high on the hill is the Alcazaba de Málaga (Malaga Castle), further down the slope towards the centre is the Catedral de Málaga. To the south is the tree lined Alameda Principal and to the west the River Guadalmedina. The main shopping part of town, and also where you will find most banks, is clustered around Calle Marqués de Larios. The principle monuments are generally based around Calle San Augustín and Calle Alcazabilla.The city has two beaches, heading through the Tunel Alcazaba from Plaza de la Merced leads you to Playa de La Malagueta (Malagueta beach). The more family friendly Playa de Pedregalejo (Pedregalejo Beach) is a little quieter but requires taking the 34 bus from Alameda Principal. 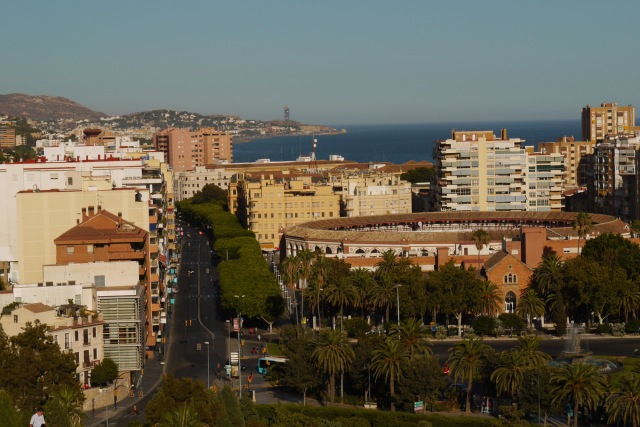 This picture was published by Malaga ayer y hoy on 17th June 2013.

We start our tour in the heart of the old city on Calle Alcazabilla, next to the Teatro Romano (Roman theatre). Constructed in the 1st century BC during the reign of Emperor Augustus, its ruins were not discovered until 1951. Perching high above, on Mount Gibralfaro, is the Alcazaba (summer 9am – 8:15pm, winter 8:30am – 7:30pm: Price: 2,20€, combined Alcazaba and Gibralfaro: 3,55€), which was completely restored in the early 20th century after years of neglect. It contains both an outer and inner citadel, is extremely quaint with beautifully ornate décor and water features, and offers great views over the city and port. Further up the hill is the even older but less well maintained Castillo de Gibralfaro (Gibralfaro castle). Better examples of Muslim fortifications can be found in southern Spain, but the views it affords over Málaga are worth making the effort to visit. 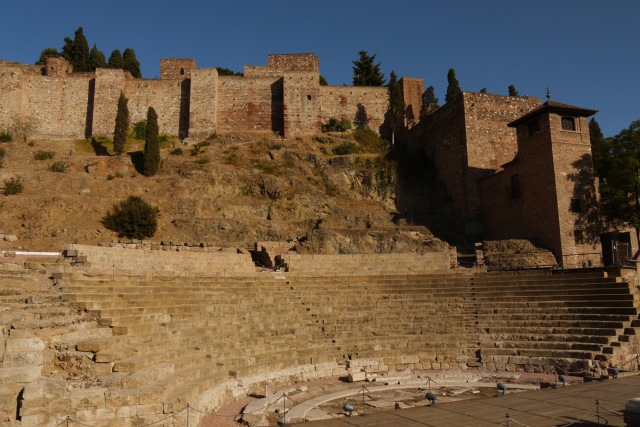 After visiting the wonders on the hill, it is now time to continue the trip down Calle Alcazabilla until Plaza de la Aduana, taking a right on Calle de la Cortina del Muelle towards the Santa Iglesia Catedral Basílica de la Encarnación or more simply Catedral de Málaga (10am – 6pm Mon – Fri 10am – 5pm Sat, Closed Sun & Mon – Price: 5€). Built on the site of the city’s main mosque, this rectangular Renaissance church took over 200 years to build. At the main entrance lays the once beautiful but now frantic Plaza del Obispo (Obispo square), and the Palacio Episcopal a 16th century palace now used as an exhibition hall. 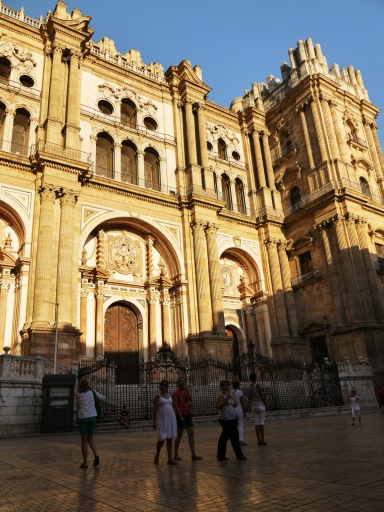 A short venture north of the square on Calle Granada is the Iglesia de los Santos Mártires, built mainly in the Rococo style, it also has a very interesting Mudéjar tower. Further along the road is the Museo Picasso (10am – 8pm Mon – Thur & Sun, 10am – 9pm Fri & Sat, Closed Mon, Price: Permanent Gallery: 6€., Temporary Exhibitions 4.5€. , Combined: 9€)situated in the Palacio de Buenavista a 16th century Renaissance palace. It contains over 200 works by the Master, including painting, sketches, sculptures and ceramics. 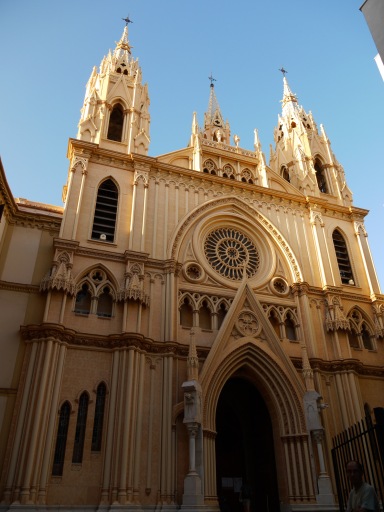 Now we continue in the footsteps of Picasso along Calle Santiago onto Plaza de la Merced, the beating heart of the city and birthplace to its most famous son. The Fundación Picasso Museo Casa Natal (Mon – Sun 9.30am – 8pm; Price 2 euros)is another museum dedicated to the great man, but this time in the house he was born. The square was originally constructed in the 16th century and was extended in the 18th century and is a pleasant enough place to while away the time, or, alternatively, you can head through the tunnel for a swim at the beach. 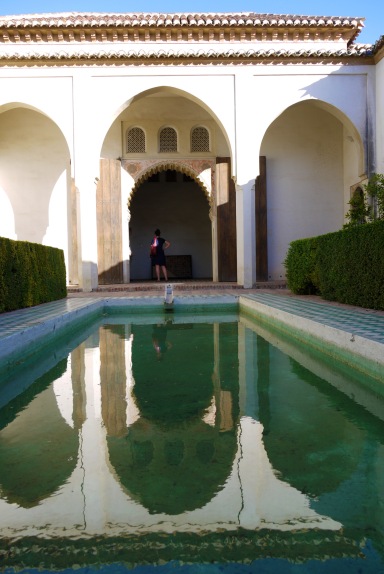 5 Things to do for free in Málaga

We here are HitchHikers Handbook love travelling for as long as possible so we appreciate the need to keep costs down when possible. Below are some of the great things you can do in Málaga without spending a penny.

Málaga offers plenty of budget accommodation for reasonable prices, for those prepared to rough it a bit. Here is a selection of some of the cheapest places to lay your head in the city.

The Melting Pot Hostel is a popular haunt for backpackers. Located on ‘La Malagueta’ beach, it is 10 minutes walk from the historical city centre. Prices and options vary with 10 bed dorms (8€) the cheapest option but there are also slightly smaller, but more expensive, dorms available. Also includes Wi-Fi.

Babia Hostel Centro is a slightly more central option, located in the heart of the old town. Options include 10 bed mixed dorms (10€) and private rooms from (15€). Wi-Fi is also available.

Patio 19 is a centrally located private house that offers cheap yet simple dorm bed (8€) and double bed private rooms (12€). There is Wi-Fi available and the included breakfast has good reviews.

Like any self respecting Andalusian city, the night-life of Málaga starts late, with bars only getting going at around 12pm, and continues through the night and into the next morning. Most of the city’s nocturnal fun can be found in three areas.

Things to buy and try

Malaga’s cuisine is dominated by the sea at its doorstep and is renowned for its fried fish. Some of the most typical dishes are espetos (grilled sardines skewered on a bamboo stick), coquinas (clams cooked in white wine) and Cazon en adobo whichis an Andalusian speciality and consists of dogfish marinated in garlic and vinegar. Malaga has many local wines such as Dulce or Moscatel, perfect for those who like their wines sweet.

Very close to the Cathedral on Calle Bolsa, 14 is El Café de Bolsa, a rather elegant restaurant but they do have Wi-Fi, so take an eternity over a coffee. Also on Plaza de la Merced 18, the vegetarian restaurant Flor de Lis is connected.

Málaga Costa Del Sol Airport is the largest in Andalusia, situated just 8km from the city and deals with 85% of traffic to the region. There are daily flights to over 20 locations in Spain as well as international destinations especially the UK, Central Europe and the Nordic countries. There are also flights to the major Eastern European cities, North Africa, the Middle East and the US.

Malaga’s newly constructed main train station Estación María Zambrano (Calle de la Explanada de la Estación), is about a kilometre west of the city centre andis served by AVE high-speed rail, offering direct journeys to Madrid (2.5 – 3hrs), Córdoba (1hr) and Sevilla (2hrs). There are also slower, but cheaper, services on offer. Two Cercanaís commuter rail lines also service the city. One heads west, along the coast, to the airport and the tourist towns of Torremolinos and Fuengirola. The other heads north to the suburbs inland.

The Bus Station Estación de Autobuses de Málaga (Paseo de los Tilos) is located less than 50m from the train station. The biggest service provider is ALSA but there are other companies such as Eurolines. Frequent buses travel along the coast to the beach resorts as well as to Sevilla (2.5hrs) Granada (1.5 – 2hrs) Córdoba (2.5hrs) and Madrid (6hrs).

Málaga’s bus network is run by EMT Málaga and runs all over town with normal tickets costing €1.20. There is a rather useful map showing the lines and stops here.

Málaga is served by two motorways, the A-45 Autovía de Málaga connects the city to Córdoba in the north. The A-7 Autovía del Mediterráneo runs all along the southern and eastern coasts of Spain and to the west connects Málaga to Marbella and beyond, Gibraltar. To the east the motorway runs to Almería and beyond that Murcia. 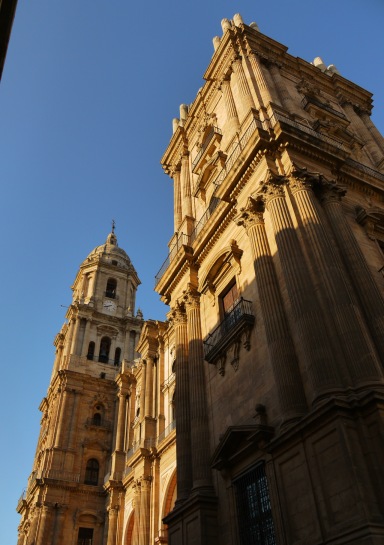 Getting out of Málaga may seem like a daunting proposition but by using the well connected public transport a lot of time can be saved. Line 2 runs directly from the city centre, north , along the River Guadalhorce, past the football stadium and all the way to the entrance to the MA-431 which is the target road for heading north. The bus stop is called San José. Simply exit the bus walk back a little to the slip road and try there. It took us about 30mins to get a ride.

From the main train station take the Cercanías train to El Pinillo. Leave the train station and head north/east through the town for about 1km. Eventually you will meet the A-7 Autovía del Mediterráneo. At the end of Calle de Vicente Blanch Picot, a road that runs parallel to the motorway, you will find a tunnel that crosses the motorway and offers access Motorway Service Station Arroyo de la Miel, from where you can start hitch-hiking.