Armenia has a rather liberal visa policy. EU citizens, as well as former CIS nationals don’t requite visas. Visas for citizens of most other countries can be requested upon arrival and for a 21 day visa you would only pay 3000 dram (€6).

For specific visa information for your country check here or here.

Hitch-hiking in Armenia is childishly easy. On a busy road you won’t need to wait more than 5 minutes and in many cases your driver will be very happy to offer you food and drink, or even to invite you into their homes for a meal. The whole Caucasus region is famous for the hospitality of its people and Armenia is an excellent example of this. Besides, there aren’t that many backpackers in Armenia, so you can count on novelty value. And if you speak a bit of Russian (as this is the second language, and the one you will most often be addressed in), then you’re sorted. 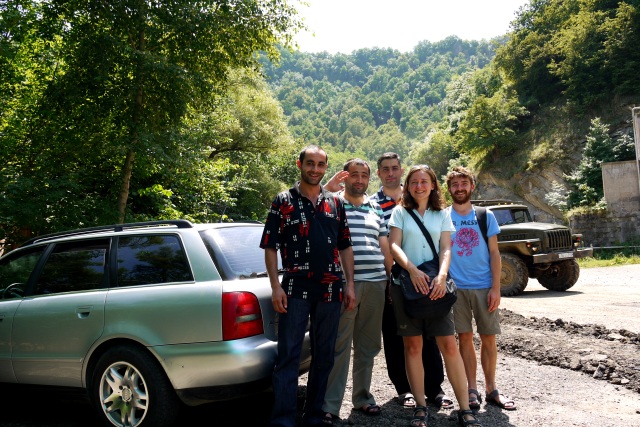 Although Armenian people are hospitable and kind, there aren’t that many of them (only 3 million living in the country), and if you decide to visit some of the more remote parts of Armenia, where there are not that many cars, you might find yourself waiting for a while (but don’t get discouraged, the first car that sees you will stop).

Another disadvantage is the lack of widespread couchsurfing (or maybe the Internet in general). We only managed to find hosts only in the capital, but the people we found were excellent hosts and friends, and we had such a good time there that we were even considering moving to Yerevan.

Talking about accommodation, if you’re outside Yerevan, your best bet are homestays. These are a sort of unlicensed guesthouses run by local families, who offer paid accommodation under their roof. In most cases they also provide food (at least one meal a day), which is a huge advantage, since there aren’t any restaurants outside the cities. The best way to find a homestay (as they don’t advertise) is just to walk the streets looking lost. You will be quickly spotted by a friend of a friend of someone who runs a homestay, so just let yourself be found and they will do the rest. In the Caucasus this form of accommodation is the cheapest and provides the most authentic sort of experience. Speaking Russian helps (as English is rare in these parts), but it’s not a must.

It’s also a good idea to have a tent if you decide to travel of the beaten track in Armenia. There aren’t that many other options outside big cities, apart from homestays and Soviet hotels, which usually don’t have hot (nor sometimes even running) water. 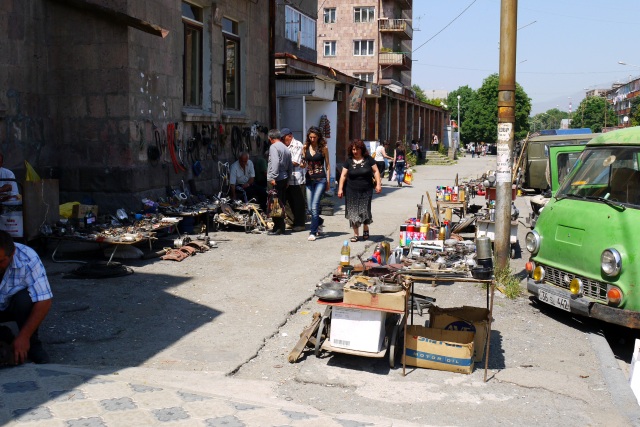 
Things you should be aware of while hitch-hiking in Armenia

The most important thing to remember while travelling in Armenia is the fact that although Armenian people are amiable and hospitable, the country’s political situation is a touch tense. First of all due to the Nagorno-Karabakh conflict with Azerbaijan and secondly because of the Turkish government’s denial of the Armenian genocide between 1915-1923. For this reason all border crossings with Turkey and Azerbaijan are closed, so you can enter the country only from Iran and Georgia. In essence, you need to plan your itinerary well if you want to visit the other Caucasus countries. It might be wise to use Georgia as a transit hub, as this nation is on friendly terms with almost all surrounding states (excluding Russia, Abkhazia and South Ossetia) and in most cases you wouldn’t need to pay for the visa (but that depends on where you’re coming from).

Another reason why you should be aware of the country’s difficult international relations is because you wouldn’t necessarily want to mention to your Armenian drivers that you’ve been or you’re going to Turkey or Azerbaijan. It’s always best to avoid political disputes especially in a language that is not your first.

You should also know that even now Armenia suffers from energy shortages, which lead to occasional black-outs, especially outside the capital. After entering the country we were astounded by the lack of lampposts in major cities. At 9pm almost everything is dark, which doesn’t foster the growth of a vibrant nightlife. You should bear that in mind, especially if you’re debating travelling after dusk. Finding a place after dark, without knowing the city well, can be quite tricky.

Armenia cannot be considered a country with a water surplus either.  In some parts of Armenia water is a valued commodity and many households use their bath tubs to store it. Bear this in mind when you crash on someone’s hospitality.

You should also be aware that Armenian currency cannot be exchanged in any surrounding state, so either spend all your drams within the country or pray that you meet other backpackers on the way who would be kind enough to cut you a deal. 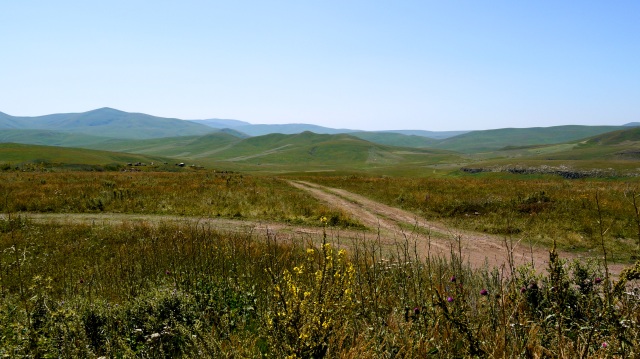 – hello – Բարև ձեզ (bah-rev dzes) (people love it when you address them in their mother tongue, even if you don’t speak the language)
– thank you – merci (like in French)
– goodbye – Ցտեսություն (tse-teh-soo-tyoon)

– hello – Здравствуйте (ZDRAHST-vooy-tyeh)
– thank you – Спасибо. (spuh-SEE-bah)
– yes – Да. (dah)
– no – Нет. (nyeht)
– please/here you are – Пожалуйста. (pah-ZHAH-luh-stuh)
– you’re welcome – Не за что. (NYEH-zuh-shtoh)
– excuse me – Извините. (eez-vee-NEET-yeh)
– what’s your name? – Как Вас зовут? (kahk vahs zah-VOOT?) (always good to know the name of your driver)
– my name is … – Меня зовут … (mee-NYAH zah-VOOT…)
– I don’t understand – Я не понимаю (ya nee puh-nee-MIGH-yoo)
– I don’t know – Я не знаю. (ya nee ZNAH-yoo)
– where is…? – Где …? (gdyeh …?)
– train station – вокзал (vah-GZAHL) (you  should know this word and listen out for it to avoid situations when your driver, in their best intentions, takes you off the road and drives you to a station)
– bus station – автовокзала (ahf-tuh-vah-GZAHL)
– I don’t have money – У меня нет денег (oo-mee-NYAH nyet DYEH-neg) (useful in any language)
– we don’t have money – У нас нет денег (oo nah-s nyet DYEH-neg)
– money – деньги (dyehn-gee)
– now – сейчас (see-CHAHS)
– today – сегодня (see-VOHD-nyuh)
– yesterday – вчера (fcheeh-RAH)
– tomorrow – завтра (ZAHF-truh)
– friend –  друг (droogh) (very useful when they ask you where you’re staying. The concept of Couchsurfing is often too difficult to explain, so just say you’re staying with a friend. You can also use this word to express the relationship between you and your fellow travelers).

We never went to Nagorno-Karabakh, firstly because it was expensive and not hitchhiking-friendly and secondly because we got contradictory information about obtaining visas. If you really want to go, plan your trip well and be prepared to spend quite a reasonable amount of money for transport, visas and accommodation,  due to the fact that it’s such an isolated place, everything would be more expensive and less available.

Caution! If you have a Karabakh visa in your passport, you won’t be let into Azerbaijan!

Nagorno-Karabakh is a de facto independent republic located in the South Caucasus with a predominantly Armenian population and culture but entirely embedded within Azeri territory. In 1923 Stalin detached Karabakh from Armenia and made it an autonomous region within Azerbaijan. After the collapse of the Soviet Union the region became the source of dispute again, which culminated in the Nagorno-Karabakh War, 1991-1994.

All the others border crossings with Azerbaijan and Turkey are closed.

There are two completely contrasting regions in Armenia which deserve to be called ‘best hitch-hiking area’ – the north and the south of the country.

In northern Armenia, you should definitely hitch-hike through the Debed Canyon, which is a long single lane road in the middle of a lush green valley with steep hills on both sides. Along the road you can visit two UNESCO World Heritage monasteries – Sanahin (built in 928) and Haghpat (dating back to 976).

Unfortunately, the canyon is not pristine as its landscape has been altered by an ugly copper mine in Alaverdi, a Soviet era relic.

The main city in this region is Vanadzor, not pretty but charming. 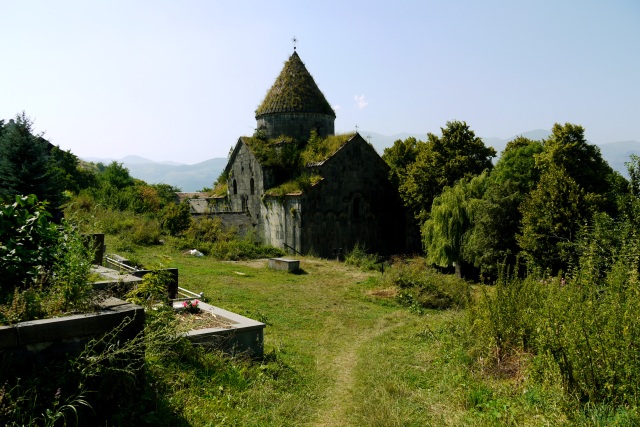 The landscape in southern Armenia, towards Iran, is quite different, but equally stunning. Here the most prevailing colour is not green anymore but yellow. You won’t find many trees there, but rocky hills with brown sand and dried yellowish grass. And empty endless roads… 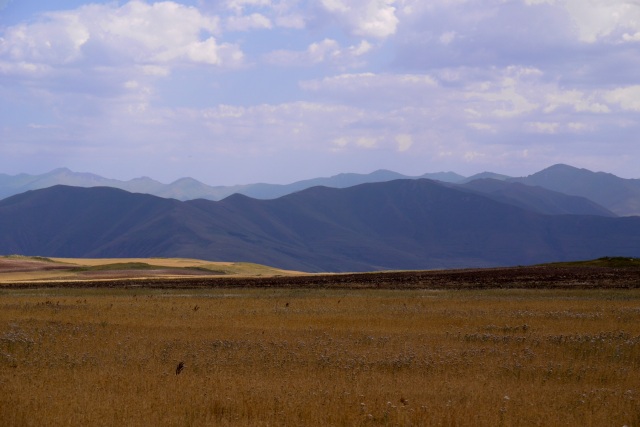 Also called the “Armenian Stonehenge”. It’s a vast stretch of land dotted with over two hundred 3m high stones. Some archeologists argue that the site is an old necropolis, others believe in its astrological role. Whatever the stones were used for back in the Bronze Age, the sight is unquestionably beautiful and worth visiting if you have the chance.

The site is located 3,5km from the city of Sisian, and then 400m from the turn-off. However, it’s not that easy to get to, since it’s in the middle of nowhere and tourism in this part of Armenia is not developed at all. We were really lucky to be picked up by a kind driver who decided to take us there and show us this amazing place. 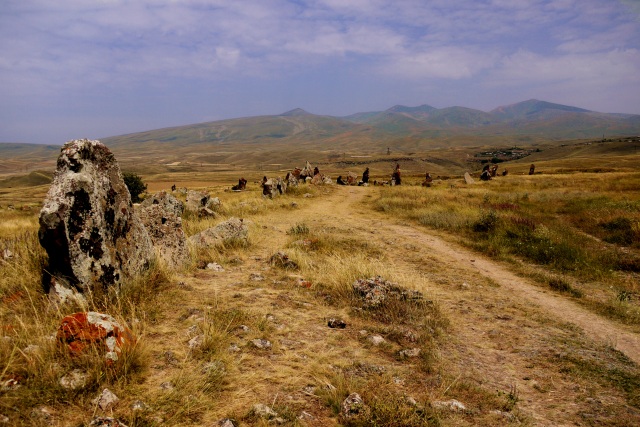 Without a doubt, the best city in Armenia, if not in the whole Caucasus region, is Yerevan. It’s café culture atmosphere, its street art and its amazingly kind and open people will make you want to stay there forever! 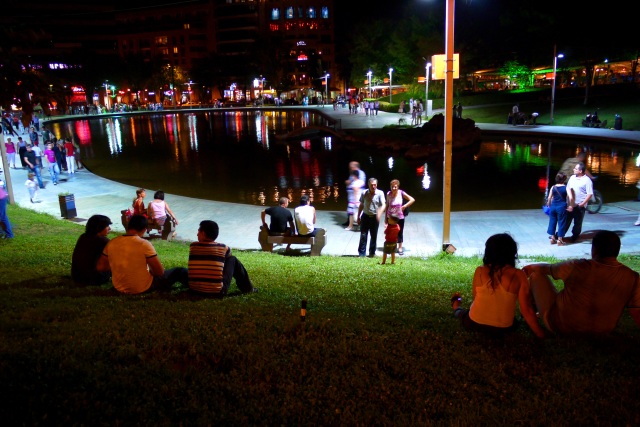 It was the only city in Armenia where we managed to find CS hosts, but the hosts we found were truly good friends who made us feel at home. We went out every single evening of our stay, being invited to parties in private houses and mingling with the local multicultural scene.

While there we were seriously considering moving to Yerevan and we’re sure we will be back one day.

The place which we were the most disappointed with was Dilijan, which wasn’t ugly but there was nothing worth visiting. Our Lonely Planet guidebook recommended this place as having a cobbled street Historic Centre, which we found was nothing more than a newly built collection of wooden houses, including a hotel, shops and a tourist information centre. Nothing historic about it, plainly just a tourist trap. 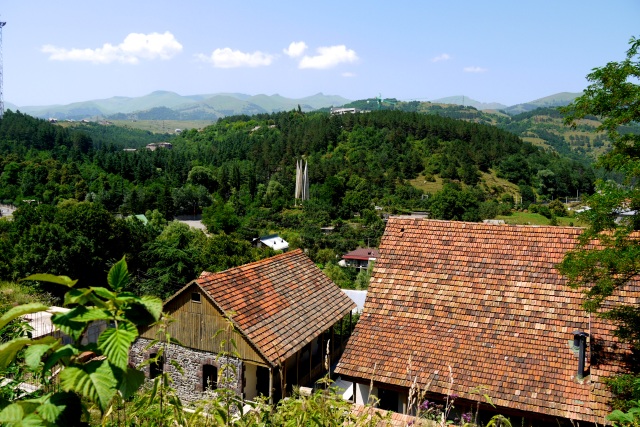 However, if you ever find yourself in Dilijan, we can recommend a good place to stay (the ‘Tourist information’ right next to the marshrutka station will try to grab your attention and direct you to their places of choice as soon as you arrive, but don’t trust them!). The place we stayed at was a homestay run by friendly Silva, who lives alone with her disabled mother. The place feels really homely, it’s very cheap, centrally located, and Silva will cook you a nice daily meal. We found her quite by chance, as she doesn’t advertise, but it was a good stroke of luck. Silva Antonyan B&B (tel.094709400; Maksim Gorky 36; AMD4000-6000 per person).

Good luck, you will love Armenia!

We hitch-hiked across Armenia in summer 2011, as a part of our Caucasus-Turkey-Greece trip. Armenia is probably the easiest country we have hitchhiked in so far, due to the friendliness and hospitality of its people. We fell in love with the landscape and Armenians in general, and we highly recommend this beautiful place!

A round tour of Armenia took us about 2 weeks and we covered almost 900 km. This was our route: 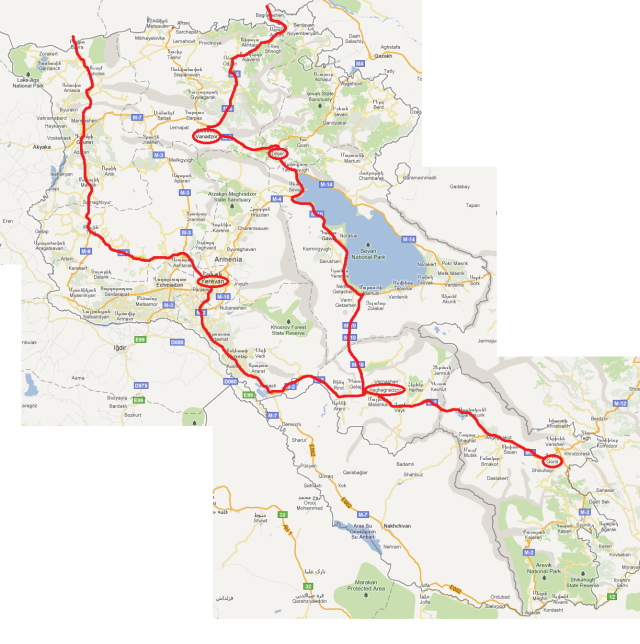 .
This country guide was also published by Fans Of Armenia  on 12th April; by Armenia Art & Architecture on 12th May; by Armenia – Հայաստան – Hayastan – Армения – Armenië – ارمنستان on 15th May; by I love you Armenia, I love you on 19th May; by ARMENIA DAILY on 20th May and by Visit Armenia on 21st May 2012.